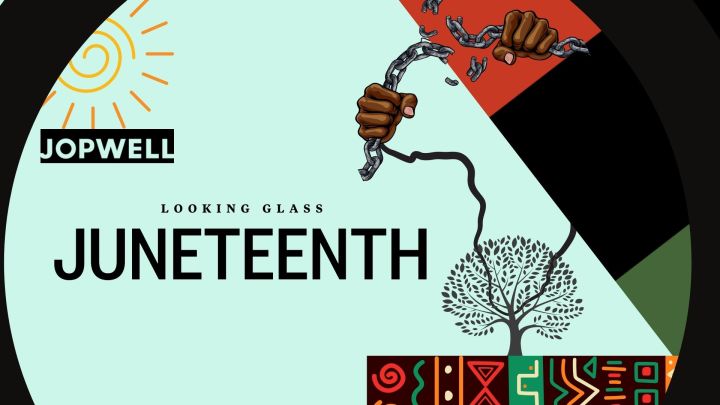 Juneteenth is finally a national holiday!

On June 19, 1865 over 2,000 American soldiers arrived in Texas to proclaim freedom to all enslaved Black Americans. This announcement came six months after the 13th Amendment was ratified and more than two years after the Emancipation Proclamation was signed. This day became known as Juneteenth. Celebration of this moment in American history rises through the evolution of racism like a root bursting though concrete. Juneteenth celebrates the love and joy that seep through the cracks of subjugation. Over 200,000 enslaved Black Americans were brought to Texas after the Emancipation Proclamation was issued. Owner/CEOs moved operations to Texas with the intention to maintain the economic relationship with those they had enslaved. Juneteenth is a recognition of intentions that produce disparity. In that way, it serves as an analytical tool, or a looking-glass. Through the Juneteenth looking-glass, we are able to see the pomp and circumstance of intergenerational trauma and subjugation.

What comes to mind when you think of celebration? Do you see fireworks, radiant colors, smiles? What exists beyond the point of what you see? The mountain of celebration is too often preceded by a valley of despair. Celebration is a process of making meaning in things that we attach value to. To that end, Juneteenth is not simply a day off or a day celebrating late freedom; Juneteenth is the enslaved family hearing of their freedom and feeling the joy of no longer having to fear having a member of their family being sold away. Juneteenth celebrates that same family seeing themselves in a sea of soldiers that accompany their freedom. Juneteenth was winning their fight to stay together. This experience of joy was also a simultaneous feeling of despair, knowing that the fight is not over. The Juneteenth looking-glass reads this historical narrative and understands that if the Owner/CEOs fled to Texas to maintain dominance, their maneuvering did not end at the Juneteenth destination.

The story of Juneteenth is not a story of freedom. It is a sustainable call to action. Every celebration is a reminder of why we celebrate. After emancipation, Frederick Douglass warned, “Hereafter, at the South, the negro will be looked upon with a fiercer and intenser hate than ever before.” Juneteenth is a reminder that the war of emancipation was followed by sharecropping, the Devil’s Punchbowl, the Ku Klux Klan, eugenics, lynching, segregation law, The Tuskegee Study, anti-integration policy, redlining, anti-voting rights, COINTELPRO, the war on drugs, gentrification, and a long history of alignment between American politics, employment opportunities, and practitioners of white supremacy. Juneteenth inspires joy, smiles, and a love of the opportunity to make history. This is also where the celebration of Juneteenth begins—it is a connection to the simultaneous existence of pain and healing. Our celebration promotes healing.

During the first celebrations of emancipation, songs of freedom were sung and celebrated. One song from approximately 1866 contained the following lyrics “John Brown’s body lies mouldering in the ground….His soul marches on.” The tone of sustainability rings through the lyrics in a way that provokes imagination. Juneteenth began as a reenergizing moment in American history where a celebration was defined through sustainable struggle. On June 19th, General Order Number 3 was issued. The order, in part, read:

“This involves an absolute equality of personal rights and rights of property between former masters and slaves, and the connection heretofore existing between them becomes that between employer and hired labor.”

The transition from property to hired labor defined a new era of racial oppression. The Juneteenth announcement distinguished enslavement from hired labor, a transition that did not repair damage and intergenerational despair. The Juneteenth looking-glass captures the “Southern Way of Life” that penned “State’s Rights” to dehumanize and profit from Black bodies. Human beings, removed from a continental home, were brutally forced to toil in heart-wrenching conditions. Freedom denied created a freedom left to question in the transition from enslavement to hired labor.

Juneteenth is a celebration of humanity defining itself against racism. Chattel slavery, the intergenerational objectification of human beings and their offspring as property, was unique in that it achieved a historical first in determining an enslaved population as ⅗ human. This definition simultaneously and constitutionally defined the barometer for humanity as white. The Juneteenth looking-glass shows us a society that rationalizes and benefits from racism. This context is then used to draw contemporary parallels. In what ways does whiteness define how we place value in labor? Schools, prisons, hospitals, law enforcement, finance, real estate, and technology are all sites of historical trauma. The Juneteenth looking-glass zooms in on the spaces where decisions are made. It then calls us to question how we, ourselves, might rationalize the way particular decisions have led to disparity. The spaces where decisions are made are also spaces for healing to occur. Companies participating in Juneteenth must, within their celebrations, seek radical historical honesty and healing as two simultaneous interlocking processes.

Black Americans have been fighting for equality since being abducted and enslaved en mass. Egalitarian principles have often been used to rationalize disparity. The requirement of “x years of experience” continues to reproduce racial and gender disparities because of race and gender labor discrimination. A glass ceiling impacts promotion and, too often, the amount of time someone spends in any particular role. Using years of experience, a degree, a school, and/or a previous job as a barometer of value means placing value in spaces that produce white overrepresentation. The only way to measure competence in an area of knowledge is to reproduce that area of learning. Arbitrary categories that assume proficiency outside of what is measured are inadequate in their measurement ability. The Juneteenth looking-glass recognizes the contradiction between egalitarian values and corporate practices. If hiring the best leads to not hiring or hiring very few people of color, it is important to understand the perceptions in practice - "best" may signal a toxic attachment to whiteness in decision-making. What are the intentions that are driving race and gender represenation in hiring and promotion? The Juneteenth looking-glass reveals where intentions, actions, and outcomes meet.

Juneteenth is about healing the same way water floods the imagination of a storm. Healing means humanizing the experiences that exist when the outcome of intentional actions produces disparity. In the corporate world, this means analyzing pipeline data to excavate sources that lead to white overrepresentation. It is going further to find alternatives to the referral networks, schools, and companies where sourcing activities reproduce racial privilege. It means analyzing promotion and attrition rates to see what patterns of identity groups advance and leave faster. It means looking at those who cite higher pay in spaces where their talent is valued more. If or when patterns emerge, it is important to read with the Juneteenth looking-glass to give life to the stories and experiences that are underrepresented. These stories are the foundation of building detoxed spaces that previously produced disparity. What are the stories that data tell us? When those stories end in disparity, what can we do to rewrite our future narrative? While Juneteenth is a national day off, it should flip the on switch to the future we celebrate through the Juneteenth looking-glass.