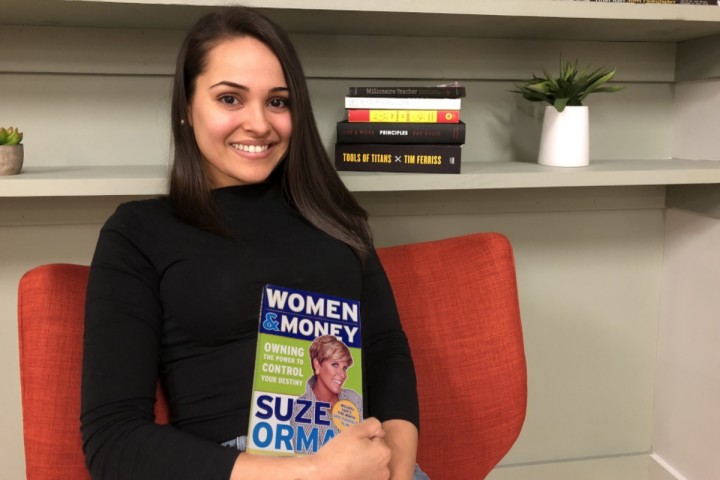 I grew up in a three-bedroom apartment in Bushwick, Brooklyn, with four brothers, four sisters, and our two parents, who immigrated to the United States from the Dominican Republic in the 1970s (just picture lots of bunk beds and a constant fight for the bathroom).

My parents spoke little to no English, but we all uttered the word “welfare” often. When my mom had to attend face-to-face appointments at the food stamps office, I would frequently serve as her very official 10-year-old “translator.”

Although we didn't have much, I understood that my life here in the U.S. was much easier than the one my parents had growing up in the D.R. — after all, they’d had to drop out of school to work on farms and took showers without hot water. And even though I vividly remember using our EBT card at the bodega, I didn’t understand what it meant that my family had one. Being a child of immigrants kept me humble and grateful for the little that I did have.


Despite all this, it became harder and harder not to compare myself to my peers as I grew into my teenage years. I felt ashamed to be one of the only kids who didn’t have a North Face coat, the latest pair of Jordans, an XBOX, an iPod, a cell phone — whatever. I never dared complain to my parents about this because, even though we often talked about money, it was always within the context of how little we had. (“No hay dinero,” they’d say, meaning, “There isn’t any money.”) So, like many people, I was never taught to manage my finances. And that’s how I found myself still living paycheck-to-paycheck several years out of college.

It was 2014, and I was feeling overwhelmed by my poor credit, student loans, and credit card debt. On a whim, while waiting in line at Duane Reade, I picked up a copy of Suze Orman's Women and Money. I was hooked. It was the first time I felt like I was in full control of my own financial future. Soon after, I came across the research of Dr. Nari Rhee at The National Institute on Retirement Security. She reported that Americans of color have much less money saved for retirement than their white counterparts, regardless of their age and income. This was partially due to workers of color (particularly Latinx workers) being much less likely to have employer-sponsored retirement options, like a pension or 401k. But also, the actual dollar amounts that each racial group saved were radically different. Whereas white households had an average of $111,749 set aside for retirement in 2010 (less than a year’s salary for a programmer in Silicon Valley), Latinx households like mine saved even less — an average of $17,600. It all sounded too familiar.

Immediately after that, I opened my ROTH IRA retirement account, and I've been contributing the maximum amount ($5,500 yearly) ever since. I also took major steps to cut back on my spending, which has allowed me to accumulate $50,000 — all before my 29th birthday! I was feeling so good about everything I’d learned that, in 2015, I started my YouTube channel, “MissBeHelpful,” to spread financial literacy in a fun and relatable way.

I honestly believe that employers should be responsible for teaching their employees about the financial options available to them. Schools should teach their students the same. If most high schools and colleges require basic courses like biology and math, why not make personal finance a required course, too? It would certainly level the playing field for students who don’t have the privilege of learning this information at home. But alas, that's not the way our current society works. So until then, I’ve got your back! Here are the exact steps I took to save $50,000 in just two and a half years. Read them, then check out my YouTube channel for more tips and tricks.

1. Leave all credit and debit cards at home so that you have to plan for every purchase.

When I decided to get serious about my financial future, I started by studying my credit card and debit card statements. One thing that stood out was all of the meaningless purchases I was making on a daily basis. The biggest offenses were the constant snacks and drinks I’d buy from places like Starbucks, Pret A Manger, Rite Aid, Duane Reade, Walgreens, and a ton of other cafés and delis around the city. I also realized I’d picked up a slight shopping addiction after seeing multiple charges from stores like Old Navy, Gap, H&M, TJ Maxx, and Target appear on my credit card statement multiple times each week. None of these purchases seemed like much at the time, but they added up to a lot of money over the course of a month. So the first thing I did was leave all my cards at home. That way, I had to use cash and plan ahead for anything I wanted to buy. After just one week, I noticed a huge difference in my bank account. And within a few months, I finally broke my habit of shopping just for fun.

The second thing I did was draft a very strict budget that cut out almost everything I was spending money on around that time, apart from bills, absolute necessities, and a few things that made me significantly happier. When setting your budget, it’s key to remember that you can include anything you want — but you can’t include everything you want. You have to decide which expenses that don’t qualify as “needs” are truly important to your overall happiness. For me, things like having my groceries delivered to my apartment, being able to take two or three trips each year (capped at $850 each), getting a massage every few months, and having a little money free to spend on one spur-of-the-moment experience each month (a fitness class or going to the movies, for example) became priorities over going out to brunch every single weekend or hitting up happy hour a few times each week.

Another thing I noticed when studying my credit card statements was the amount of money I was paying in interest every month — ouch! But I did a little research and discovered that I could cut those numbers in half by paying off my credit cards with a personal loan that had a lower fixed-interest rate. I took out two loans and set up automatic monthly payments for the money to be taken directly out of my checking account come payday. Each month, I owed one payment of $313 on paper, but I always doubled that amount and sent $600 or more. Yes, the payments were high, but having the money taken out right away meant it was never in my account long enough for me to become attached to it. I used Lending Club for the loan process because a friend sent me a referral deal. But other companies like SoFi and Prosper are work just as well. Make sure you get the lowest interest rate offer available and only accept a manageable monthly payment, in case something happens and your income decreases.

Once I stopped going to brunch every weekend (limiting it to once a month or every other month) and started cooking and packing my meals at home instead of ordering out for dinner or buying lunch at work, the money I was saving started piling up. Initially, it all went toward paying off those two loans I took out to cover my credit card debt, which took about 23 months. After that, I was able to start funding my savings account. Once I hit my savings goal of having three months’ rent set aside, I started putting the extra money toward my retirement fund ($458 each month) and the rest into the stock market. That’s when your money really starts working for you, because it grows more than it would sitting in your savings account!

5. Use your “time off” to generate even more income.

Since I significantly reduced the number of times I went to brunch, the movies, restaurants, and happy hours, I had a lot more free time on my hands. And I used that time to pick up a shift at my gym in exchange for free classes (saving me hundreds of dollars) and posted YouTube videos about my new money habits. After a year of uploading videos, my channel began to generate income! I then added that to my savings plan, which, combined with my ROTH IRA contributions, totaled $30,000 by 2016.

When I decluttered my finances, I realized that my surroundings still impacted how I was spending money. Oftentimes, I felt like it was necessary to add things to my apartment or change things in order to “spruce it up.” Then I came across the Mr. Money Mustache blog, which promotes the concept of minimalist living as a way to be more frugal and accumulate money at a faster rate. The less stuff I spent money on, the less stuff I'd have, and the more money I'd keep. It made total sense to me! So I decided to declutter my entire apartment. After selling many belongings that I didn’t need or want anymore (and saving the profit), I felt refreshed and ready to make space for my new priorities. I’ve continued to save aggressively (50 percent of my monthly income) and by the summer of 2018 — right before my 29th birthday — I’ll have more than $50,000 saved!