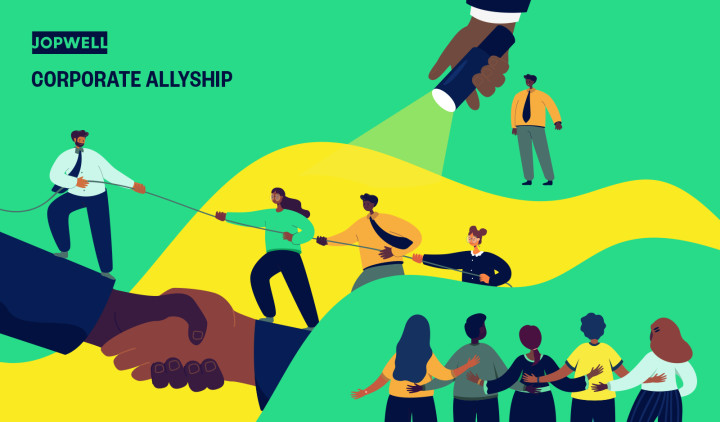 Crabs at the bottom of the barrel are known to pull down their fellow crabs that are trying to climb and claw their way toward freedom. This crab-in-a-barrel phenomenon is the opposite of allyship. Rather than pulling others down or being complacent in neutrality, allyship, in the context of the aforementioned barrel metaphor, requires one to be the bridge that transforms certain death into potential freedom. The barrel is a metaphor for corporate spaces, and the crabs are the decision-makers that make opportunities fleeting for people of color. All too often, companies search for talent where diversity does not exist, while simultaneously limiting the success of employees of color. Allyship interrupts these two intersecting experiences to reimagine better work and recruitment conditions. Corporate allyship is the practice of aligning with the interests of underrepresented people through intentional and sustainable action. This is particularly important in the area of racial justice where efforts to recruit diverse talent has achieved little over the last few years.

Merriam-Webster recently expanded the definition of racism to include systemic racism. Allyship has inherited the same evolution that reflects the history that has been made in a post–Breonna Taylor and George Floyd era. Allyship has shifted from the "I see you, and I hear you" armchair activism of color-blind corporate America to something that requires risk and work. It is much easier to live behind the (im)moral veil of “color-blindness” and exist in a world where everyone is judged by their character than to understand the experience and perpetuation of racism. Commitment to “color-blindness” also means that one does not have to face the fact that melanin concentration shapes how character is perceived. Challenging this conventional practice also means potentially being seen and treated as deviant. Allies must, therefore, practice strategic self-deprecation to out practices, processes, and ideas that perpetuate racial disparity and are similtaneously validated by those that benefit from them.

Allyship has historically been practiced in a way that has created an echo between statements and actions. The call and response chorus has made great soundbites and promises that contridict progress. If virtue signaling were like making music, there would be more pauses and breaks than actual notes. Those spaces of silence are also spaces where vibrations beyond earshot are directing actions that have inherited the responsibility to protect traditions. These are the dog whistles in corporate America that say, “this candidate is not polished”, or “we want to hire the best candidate,” or “we are looking for a rockstar.” Allyship recognizes that the outcomes of what these statements produced contradicts their good intentions. Allies unpack normal ways of thinking and being that produce racial disparity in a way that reveals contridictions for what they are. People and organizations tend to protect traditions they have benefited from and label those as good. Well placed words alone perpetuate the problem. Therefore, allyship is an investment in people and commitment to action.

Allyship is a collective journey to change how our mutual existence shapes and is shaped by racial disparity. This does not “feel good” when done correctly. The space where values are contradicted by behaviors is both unfriendly and uncomfortable. It is the dirty closet of our collective consciousness that we keep closed for a reason. This collective closet is also where racialized experiences exist. An ally’s job is to begin unpacking that closet to discard, not disregard, those contradictions. To go a step further, allies must also invest time to better understand how racism is experienced by those that have historically benefited from it. Cleaning out the collective closet of contradictions while simultaneously understanding how it got that way is one of the most difficult tasks of an ally. This task requires allies to understand how racism is experienced alongside the ideas and behaviors that sustain racial disparity.

Allies are accomplices in the journey toward racial justice. The goal of an accomplice is to engage in an activity that solves the initial shared issue. Being a part of the solution involves empowering people to share their own stories and develop solutions. Intentional actions have created (un-)intended outcomes. Allyship recognizes that there is always room for improvement and commits to filling that space with sustainable, action-oriented, collaborative, and self-critical relationships that work toward racial justice. Vulnerability is a strong learning tool that enhances the ability to reveal the space where values, behaviors, and contradictions simultaneously exist. Vulnerability allows allies to empower both Black, Latinx, and Native employees to share their voices with one another and allies to strategically bring their stories into the spaces that decisions are made.

Corporate allyship is the key to increasing representation in the workplace. Allies need to approach the problem of white overrepresentation by aligning with the interests of underrepresented groups to develop a solution. For example, speaking out against assigning tedious tasks that drive employees of color away from measurable goals is a way to align with the interests of underrepresented groups. Individuals and organizations that create intentional spaces of healing where concerns can be discussed without fear of reprisal allows the way racism is experienced to immerge. Creating these spaces also creates a space for solidarity and allyship to coexist.

An ally must empathize with the ways of thinking and being that cause the problems they wish to help solve. They must understand why a strong candidate was rejected and push back as rejection reproduces and is predicated on existing racial stereotypes and outcomes. By doing so, an ally can properly advocate to interrupt sustainable biased processes and outcomes. Advocacy also requires preemptive education, expectant of pushbacks or reprisals that protect the traditions producing disparity. This can be as simple as having intentional conversations about how racial stereotypes precondition decisions. Further, learning outcomes should be structured to demonstrate how racial bias impacts workplace decisions. The learning objectives that shape the outcomes can best be packaged by providing real (subtle and nuanced) case-based scenarios. Learnings from participation can then be applied to new and existing policies and processes. Allyship seeks sustainable and tangible actions that restore balance through actions against disparity.

Allies lead with curiosity to simultaneously self-reflect, invest attention, and focus on unknown experiences. Leadership requires learning in spaces where the absolutes of stereotypes and the outcomes used to justify those stereotypes interrupt the authentic human experiences that promote inclusion. Absolutes and their moral inclinations are some of the most significant barriers to understanding the experiences and related outcomes of underrepresented people. Unfortunately, barriers like this also dominate professional environments. Allyship exists in the space where learning and curiosity are unhindered by absolute ways of thinking and being. This curiosity comes with the commitment to change conditions that devalue underrepresented people's presence, perspective, and intelligence. The adage, "a mind is like a parachute. It only works when it's open," comes to mind. Allyship taps into vulnerability to repurpose all sensations to the collaborative goals you share with your allies.