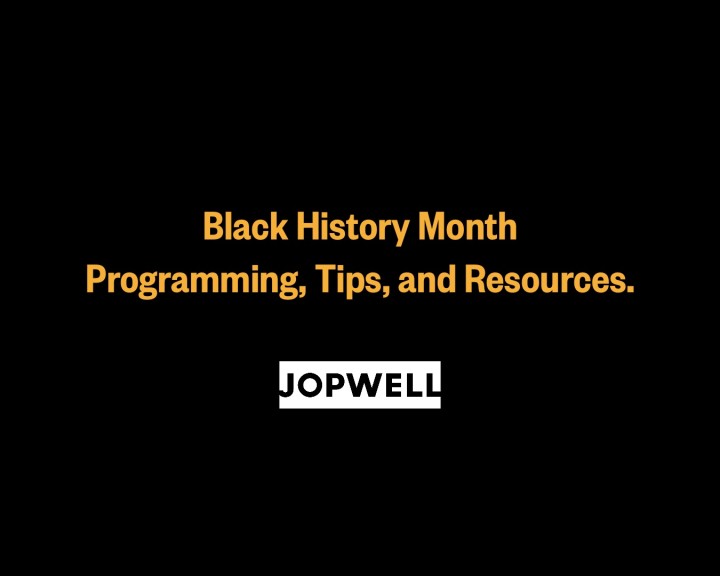 Written by Tani Brown, Head of Community at Jopwell

The origins of Black History Month date back to 1926 when historian Carter G. Woodson began designating the second week in February as "Negro History Week." Woodson was one of the first widely recognized scholars of African diaspora and African-American history at a time when the contributions of African-Americans were largely being misrepresented and ignored in the narrative of U.S. history.

The second week of February symbolically coincided with the birthdays of Abraham Lincoln (February 12) and Frederick Douglass (February 14), both notable figures which held great significance to the Black community and had been widely celebrated together since the late 19th century.

With that, here are some tips for developing your Black History Month programming.

Go beyond the token moment

Avoid performance-level activism. Don’t share a picture of Martin Luther King Jr. or Maya Angelou without regard for historical and present day context. Be wary of how your written and verbal statements frame the achievements of an individual, cause, or movement. Awareness months are opportunities to show that your organization values the advancement of diversity, equity, and inclusion. How does the recognition and acknowledgement you’re sharing inform the mission and values of your organization?

Ask yourself - what is the company trying to achieve with Black History Month programming? Do you have company goals that you are trying to amplify through your messaging? Do you want to share the benefits of having specific perspectives at the table? Are there causes your leadership wants to champion? Outline specific goals, and make those goals known org wide! Normalize highlighting experts in their specific fields (that happen to self-identify as underrepresented), compensate them, and bring them in year-round – outside of Black History Month. Especially if you are in an industry that has been slow to recognize minority movements, bring awareness to milestones, firsts, and achievements of diverse groups within that industry.

Ask but do not assign

Announce that your organization is investing in Black History Month, but do not automatically assume your Black employees are responsible for ownership of programming. Many Black employees often lament that they are asked to essentially work for free during Black History Month as knowledge and culture experts. There are a myriad of issues with this assumption, but the most harmful is the perpetuation of the pay-opportunity gap disparity that minority awareness months are meant to draw attention to. Diversity without inclusion. Symbolism without meaning. Action without accountability. Ask ALL employees if they would like to support and reward them for their time with compensation, recognition, and acknowledgement.

Invest, don’t just show up, to affinity history months. The urgency that companies and their teams feel around Black History Month is the consistency they should aim for year-round. Aim for steadiness over perfunctory actions; it’s the key towards shifting your organization from a reactive observer to an active participant in the DEI conversation, one that truly values and benefits from diversity.