A Lesson on Indigenous Resistance in Honor of Indigenous Peoples' Day 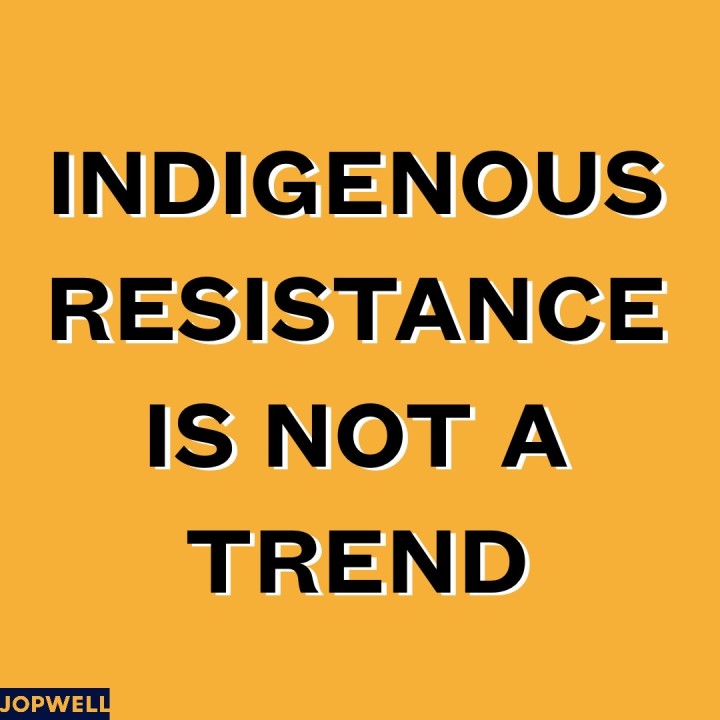 Work connects us to the land that our histories are written into and the sustenance that nourishes our sustainment. The work of Indigenous communities has always been connected to the land and memory of their ancestors. An origin of Native people that have resisted settler colonialism, genocide, and erasure that continue to define Native identifying persons and their contemporary struggle. This sacred connection to the land connects past and present, in an eternal dialogue with our future, which is also a dialogue that intertwines the worst and best parts of American history. Genocide, being the worse part of this historical dialogue, and resistance being the best.

Indigenous resistance and colonial oppression has been an omnipresent fight for cultural and spiritual existence. Since Columbus sailed the ocean blue in 1492, the destinies of indigenous civilizations across the world have been forever altered. Disease was spread faster than invasion, causing civilizations to fall in numbers that exceed any previous genocide. However, Indigenous resistance is not a story of conquest, it is a story of resistance. Biological warfare, forced removal, cultural and spiritual erasure continue to shape the narrative of Indigenous groups, globally.

The sun rises on forever tomorrows, never eclipsing the hope of our survival. The midst of a grave destiny may stretch its hand, and yet we still bless the land of our ancestors. Indigenous People’s Day is a day that represents resistance to both cultural and spiritual genocide. This resistance continues to rewrite torn treaties to manifest a destiny that transcends an attempt to erase the promises of ancestors from generations’ past. In an effort to preserve the legacy of Indigenous cultures, this day is dedicated to honoring this history and culture that has been displaced for generations.

In 2016, we experienced supportive protests around the world standing in solidarity with the Standing Rock Sioux. The North Dakota Area Pipeline threatened the people and land with environmental degradation. This movement conjured the historical moments of “Wounded Knee,” where fire hoses were used to disperse protests during the North Dakota winter. One hundred and twenty six years connected a massacre of over one hundred people to a broken treaty that, ultimately, polluted the land. This historical event brought global solidarity in a movement that resisted domination of Indigenous land and life.

Today, Indigenous peoples are disproportionately impacted by COVID-19, which has given us a similar historical narrative. According to the Center for Disease Control (CDC), Indigenous groups residing in the United States are 3.5 times more likely than Whites to be infected by the virus—due to underlying health conditions. The history of Indigenous resistance makes one thing clear—that the underlying health condition that most predicts this disparity, is systemic racism.

Since the era of colonialism, European diseases spread through Indigneous populations faster than colonial invasion. First Nations have survived genocide in spite of a history of settler colonialism that sought cultural and spiritual erasure. Today, the CDC admits to not collecting enough data to effectively measure and mitigate the impact of COVID-19. However, the history of resistance and solidarity united a global community in the fight against the North Dakota Area Pipeline. Standing Rock signifies the continuity of Indigenous resistance, it is also the heart of the fight against COVID-19. When we fight to protect the land that nourishes our ancestors and future generations, we save humanity. This is what Indigenous resistance has to teach the world.