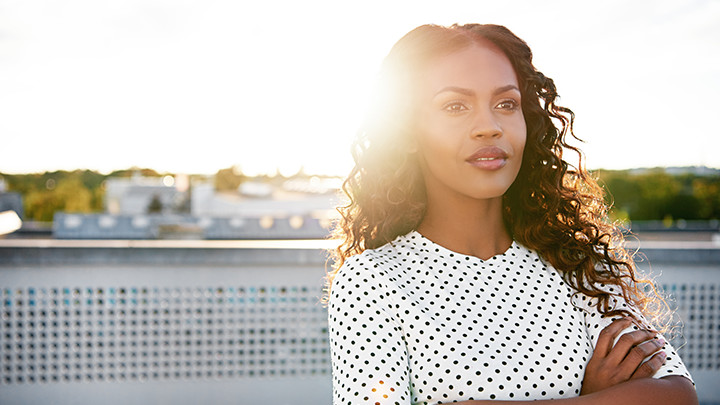 Do you believe in the power of manifestation and visualization when it comes to making concrete changes in your life? I used to laugh when people said they “manifested the life of their dreams. ” The thought of “manifesting” money, love, or a career seemed ridiculous and unlikely to happen to someone as pragmatic as I am, but last April, I became a believer.

Before I started working at Jopwell in May 2018, I spent years telling people that I wanted to work in diversity and inclusion. My dream job was to help people who look like me land opportunities and be part of a community, but I had no idea where to start. I felt unqualified for every job that caught my eye, and I was frustrated and unsure if the right opportunity would ever arise.

What I didn’t realize is that I had been setting an intention and speaking my job at Jopwell into existence all along. I’d even close my eyes before bed and try to imagine what a career in diversity and inclusion could look like and how fulfilling that role would feel. I tried to have faith that something would change and one year later, something did. I’m now the Community Engagement Lead at Jopwell and doing exactly what I envisioned.

It goes without saying that you have to do the work to make the changes you want to see in your life, but planning and visualizing aren’t mutually exclusive. In fact, the two often go hand in hand. Here are five tips to get you started if you want to give your manifestations a concrete edge.

Speak your goal into existence

Instead of saying, “I want to/wish I could do ______,” start saying, “I will do ______.” Each day, I would wake up and tell myself what I wanted my career to look like by a certain date, and I wrote that date in a notebook that I kept by my bed. Instead of treating my dreams like a deep, dark, secret, I also shared my aspirations with colleagues and others whenever the subject arose. I didn’t see talking about my goals out loud and committing them to paper as embarrassing because I hadn’t achieved them yet; I was simply holding myself accountable. There was a real benefit to doing this: Friends began to share jobs and opportunities with me that they thought I might be a fit for; they also connected me with people who were already working in the D&I space.

In hindsight, I realize one of the reasons I felt stuck for so long is that I was vague about what I wanted to do. Quite frankly, I didn’t actually know what a career in D&I looked like or what it involved on a day-to-day basis. Rather than try to manifest a hazy vision, I began to do more research on D&I advocates and actually stumbled upon opportunities at Jopwell by chance. I reached out to the HR manager on LinkedIn, told her how much I loved what the company was doing, and was honest about my desire to work there in any capacity. There weren’t any openings at the time but I checked in with her every few months until an opportunity arose. Sure, I spent a lot of time dreaming about a job becoming available, but I backed that up by narrowing my focus and by following up with the hiring manager so I remained top of mind.

I didn’t know anyone who worked at Jopwell at the time, but I could harness the power of social media. I followed the company page on Instagram, read articles and resources from The Well, and reached out to the HR manager for an informal conversation to hear about her experience. She was very candid and talked to me about startup life and how she was always being challenged and growing in her current role. Because of our conversation, I felt much more assured about my own vision. I came to a better understanding that even though startup life isn’t for everyone, I was ready to make that transition myself.

After seeing Jopwell host an event full of black and brown professionals, I knew more than ever that I wanted to work there. I didn’t know how to get my foot in the door without a background in recruiting but I did know that I had to start somewhere. I went back to the date I had in mind for my career change. Having a deadline inspired me to work harder to stay on track, and I used it as my threshold for when I would leave my old job. I also focused on what I needed to do in the interim. I took a course and received a certificate in HR Management to show that I was serious about breaking into the field.

Visualizing without executing is just dreaming. In most cases, things won’t just fall into your lap without any effort on your part. Not only did I visualize and manifest the life I wanted, but I also strategized and put in the time and effort to make it happen. Taking an expensive HR Management course may have seemed foolish to other people but I knew that I needed to learn more about the area I wanted to work in. I also attended D&I networking events to meet more people and become familiar with companies that were doing great work. The effort was worth it: I ended up beating the deadline I set for myself and joining the company I had in mind all along. Although it took time, each gradual success was meaningful. I gained an appreciation for the effort that goes into making a dream a reality, but also understood what it took to make that happen.