Pay Her: Black Women and the History of the Gender Wage Gap

This year, Black Women’s Equal Pay Day landed on August 3rd. For context, this date represents the approximate day that Black women must work into the year to make what white, non-Hispanic men made at the end of the previous year—an extra 214 days. Another year goes by where we have to acknowledge the unfortunate truth that Black women are still paid 63 cents for every dollar compared to white men. Studies show that this wage gap is consistent across all industries, which adds up to a loss of over $2,000 each month and close to $1 million over the course of the average 40-year career according to the National Women's Law Center. Despite the disadvantages that Black women and other women of color face in the workplace, we continue to see accelerated levels of growth in various fields across the professional scope, but at what cost?

Last year, Black women got paid 62 cents to the dollar—#growth amirite? Wrong. Over the last year, women have left the workforce in unprecedented numbers due to the Covid-19 pandemic. While other racial groups have seen a consistent decline in unemployment rates, Black women experienced an increase in their rate to 8.7% from 8.4% in December 2020. In February 2020, right before the coronavirus was declared a pandemic by the World Health Organization, Black women had an employment to population ratio of 60.8%; that now stands at 54.8%. This 6 percent drop is the largest among all racial groups—men and women. It’s quite evident that economic occurrences disproportionately affect Black women compared to other communities, but the bigger issue in this is that there isn’t enough being done to change the status quo. There are many reasons why the gender gap exists and Covid-19 and other economic circumstances have solidified that Black women and women of color have been left in the dark on the priority list. But let’s remember that the workforce wasn’t equitable in many industries for women of color, even prior to the pandemic.

Black women have had the highest levels of labor market participation since the US started counting—regardless of age, marital status, or presence of children at home. And that participation is crucial to Black households. As of 2020, nearly 75% of Black mothers with children under 18 are key breadwinners for their families, compared to 45% of white mothers. So why are Black women getting paid so much less?

The history of the gender wage gap rests heavily on the early stages of occupational segregation, which occurs when one demographic group is overrepresented or underrepresented vastly in particular career fields. The longevity of occupational segregation has been fueled by many aspects of inequity, the majority being the lack of representation in certain industries. The wage gap isn’t solely based on what you make, it’s also contingent on what you do. The issue that arises when pointing to specific career focuses is that there is a lack of opportunities for Black women and women of color in some of the highest paying fields, such as tech, healthcare, finance—the list goes on. Research shows that Black women such as doctors, nurses, teachers, childcare workers, and even cashiers, for example, make 11% to 27% less than white men, according data from the Economic Policy Institute.

Studies have shown that Black women across any given career get paid about 37% less for the same job compared to their white, male counterparts. 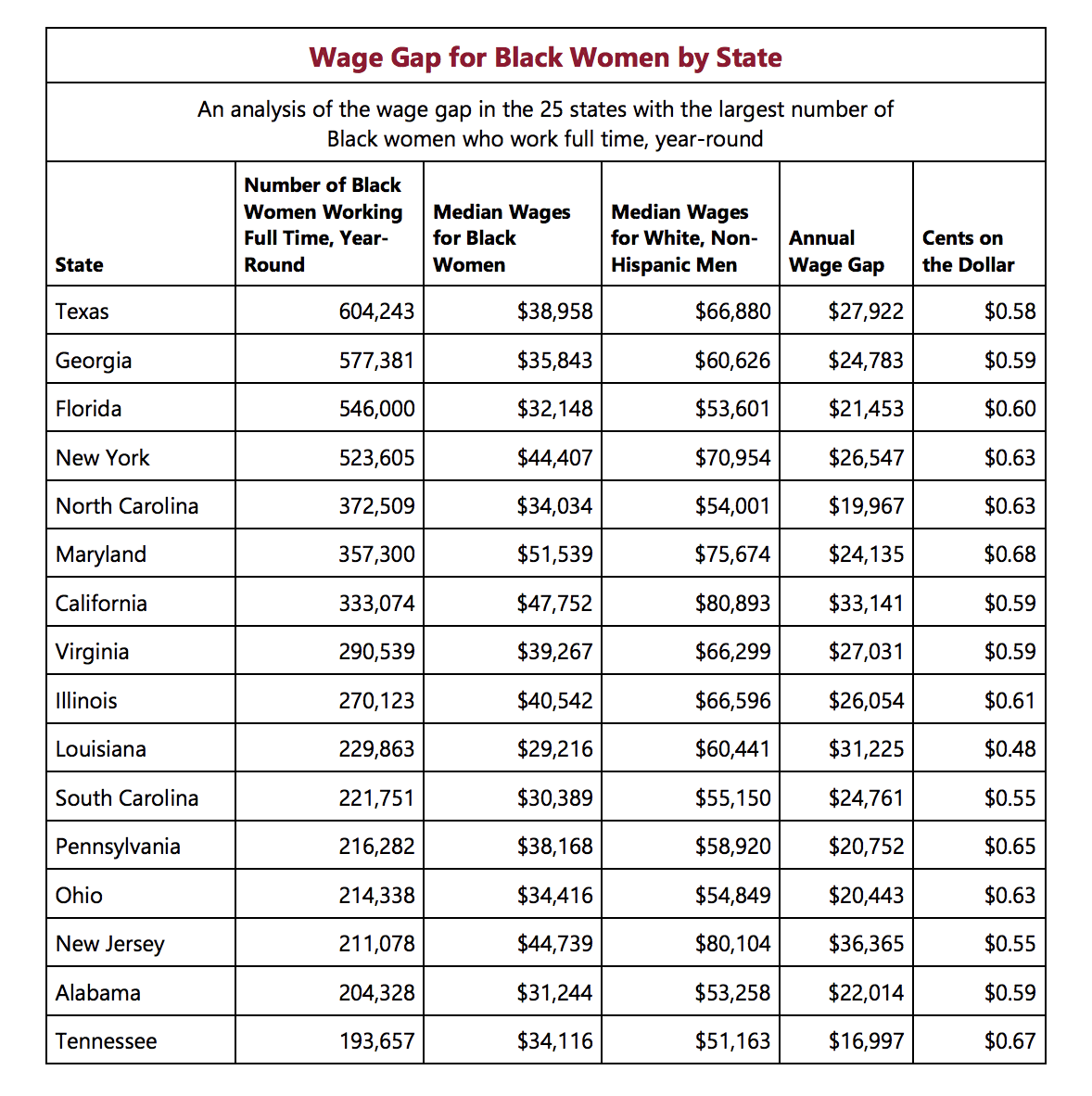 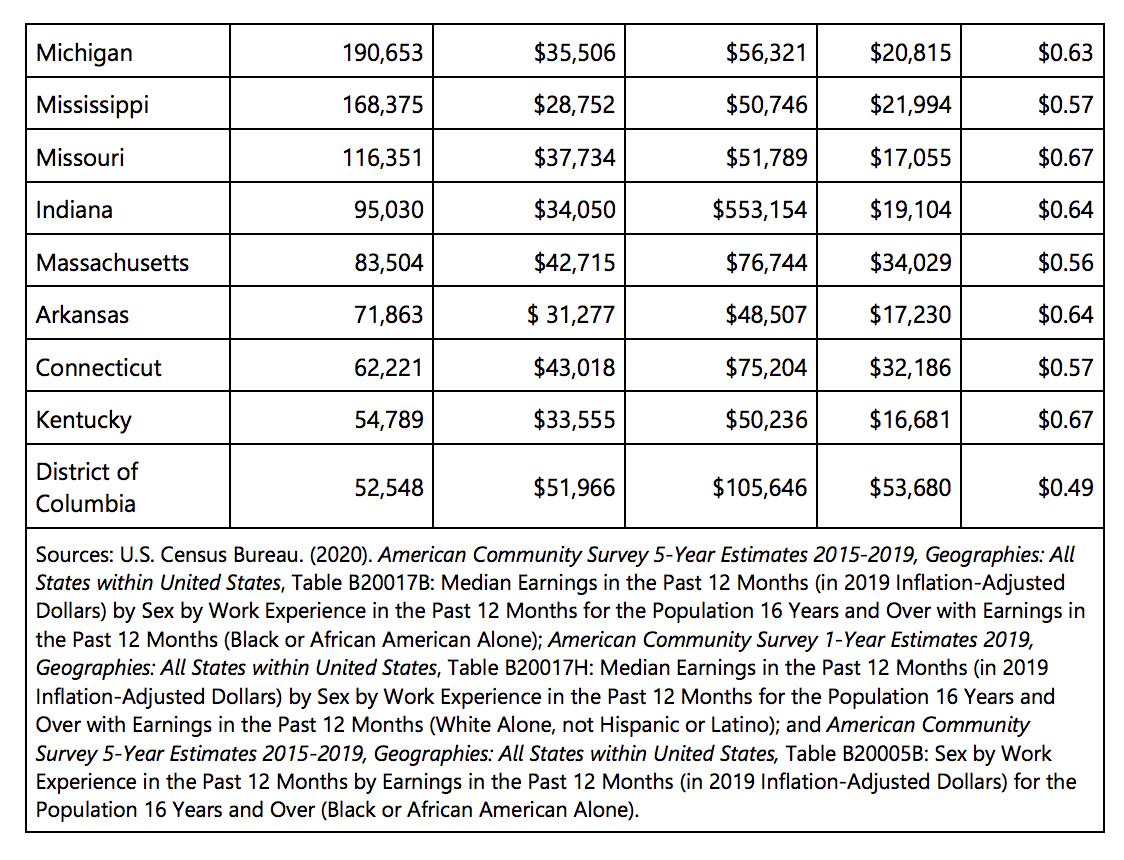 Look at your C-Suite, is it representative of the diversity in which you speak of seeking within your company? If not, there’s a place for you to start. There’s still time to build practices that center Black women and people of color that have not been prioritized in these positions. We’re not suggesting tokenism, but truly giving your company a chance to weigh opportunities equally by having an equal number of individuals in the hiring process from diverse backgrounds. Modifying current hiring practices that might skew heavily to one demographic, gender, or race, implementing an equitable hiring framework will inevitably benefit the recruitment and advancement of Black women and women of color.

Build salaries based on the market, but also build your salaries based on your own internal scope. What do people get paid across experience levels at your company? Make sure that starting salaries are all created based on the market value and intentionally assess the experience of each individual by their resume and previous roles. Try proposing salaries to future hires prior to interviewing them based on their credentials. Of course, salary negotiation is a factor, but use their credentials as a baseline for their offer prior to meeting them—without knowing what they look like.

If you aren’t able to give a hire a certain salary, create a growth plan for them before hiring them and solidify the plan in their hiring contract. Be explicit and also fair about their progress and how they should be excelling in order to receive promotion. It’s important that this process is streamlined across management, regardless of the department in order for implementation to be cohesive throughout the company.

We remain optimistic about the future, which is why it’s important to acknowledge that companies and organizations have a unique opportunity at hand to play an imperative role in building a better, more sustainable economic future for themselves and their Black communities. Growth begins with acknowledging the facts, especially in larger corporations. Look at equitable changes as a key performance indicator (KPI) for the year. Once you acknowledge that it should be a part of your business model, you can truly invest time in implementing real change.