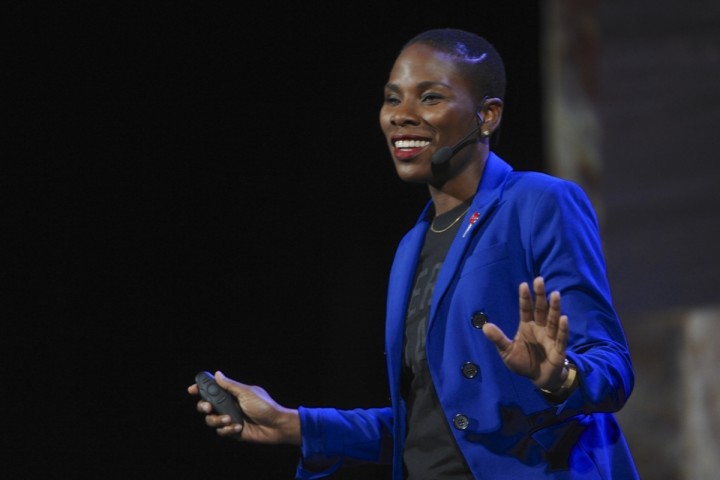 Luvvie Ajayi has a lot to share, and, based on her more than half a million social media followers; bestselling book; and invitations to events everywhere from the Obama White House to Oprah’s house, the world seems more than willing to hear her out.

The New York Times bestselling author of I'm Judging You: The Do-Better Manual began her career as a blogger, self-publishing her musings about “TV, movies, technology, travel, race, and life’s random adventures” before she (or anyone, really) knew blogging could be a career. Fourteen years and many Scandal recaps later, she has served as an ambassador for brands such as Comcast, McDonald’s, Target, BET, and Nielsen; blogged from the Academy Awards red carpet; founded The Red Pump Project to raise awareness about the impact of HIV/AIDS on women and girls; and landed a high-profile option deal to turn her book into a TV comedy. But Ajayi is quick to emphasize that journeys run deeper than highlight reels. In her case, blogs led to columns, columns opened doors to speaking gigs, speaking gigs sparked brand ambassadorships, and all of the above led to visibility, mentorship, and opportunity she has evolved into her career as a bestselling writer.

Today, as she wraps up a speaking circuit as the headliner of Together Live – an annual speaking tour across 10 U.S. cities aimed to empower women to find purpose and celebrate their diversity – Ajayi says it’s more important than ever that people use their platforms to get real about their stories. “A lot of times, people just see where you end up without knowing where you came from and how you got there, and that’s less real,” she tells The Well. “It took steps. Nobody woke up one day and ended up at the top.” Take us back to the early days of your career. How did you get your start?

I started blogging 14 years ago. It was accidental in that I didn’t strategize. I wasn’t like, “I’m gonna do this, and this will come from it.” I just did it out of love, and I feel like the universe kind of planned it out. Everything that has come from that has been an amazing surprise.

That’s one thing I feel is really important to let people know: Sometimes you just land somewhere you didn’t plan. And if you find that you love it, you should go with the flow. For me, one thing just kept leading to another until I realized that people were actually starting to pay attention to my work. When [Scandal creator] Shonda Rhimes tweeted that she was reading my tweets about her show, I was like, “Holy smokes. This is amazing!” But it was a slow build. I don’t buy the term “overnight success.” I was at it for years, and it never felt like “boom” out of nowhere.

You’ve built a captive audience of readers and fans. How does success continue to motivate you?

I want to affirm anybody who has a thing that they love to do but is afraid to own it because they realize it has no guarantees. I want to affirm any young Black woman who doesn’t get that affirmation enough. Outside validation can’t be our only source of affirmation, but I find it pushes me over the edge toward believing in myself a little more.

It took me a while to call myself a writer. I was like, “I’m not a writer. Toni Morrison is a writer.” And I still remember how good it felt when Shonda first spoke about me. Honestly, every time someone I admire retweets me or acknowledges me, it’s affirming. That’s why I try to give the same in return by making sure to affirm other people’s work that I’ve read and enjoyed. I’ll tweet about someone, and then they are like “Oh my god, I can’t believe it!” It can be surreal.

Read: How I Turned 4 Years In Prison Into A Successful Business Do you set specific goals for yourself?

You know, I haven’t set any major goals. The biggest goal I set for myself was to be a New York Times Best Seller. But, rather than checking achievements off the list, I just want to keep doing the things I love, whatever that looks like, whatever evolution that takes. I’m open.

What’s your best advice for others wanting to (or working to) transition a passion into a profession?

First, whatever it is that you love to do, do that thing. A lot. When my profile started to rise, it wasn’t because I did the research to make that happen. I had just been writing for such a long time on my blog that my visibility grew.

Second, understand that your art has value and is worth money. That may or may not be acknowledged right away. I was writing for myself for free for a long time before I could charge someone else to have me write for them.

That brings me to my third point: Go where your work is needed. Blogging used to be a hard thing to monetize, so I had to figure out who would want what I was selling. Do your research and find out what your market is. That’s how I ended up with my first column in Ebony. What inspired you to join the Together Live speaking circuit you’re on right now?

I decided to be a part of the Together tour after talking to [author and activist] Glennon Doyle and hearing what she wanted to do: Create a room where women who might not typically have access are able to learn from women who do amazing things. People often see where you end up without knowing where you came from or how you got there, which feels less real. We’re walking the audience through our journey to make our success more tangible. Nobody woke up one day and ended up at the top.

Have you found that’s resonated?

We’ve gotten so many messages and comments on social media from people who’ve told us it was life-changing for them. One woman, whose husband had just left for Afghanistan, brought her two daughters to one of the events in Austin. She messaged me the next day to say, “You don’t know how much that night meant to my daughters. It lifted their spirits.”

What’s your most recent pinch-me moment?

I recently met Michelle Obama at an annual event she hosts speaking to 200 high school seniors about the benefits of a college education. I was invited to be one of the speakers this year, and getting to meet her was one of those “Oh-my-God-I-cannot-believe-it’s-you moments.” She and I are both Chicago girls – we went to the same high school about 20 years apart. It was cool to be able to be in that room.

How do you feel about mentorship?

We should all be mentors, because we all have mentors. There’s often a reason we end up in the rooms we do: It’s that somebody mentioned our name to somebody who was already there. Be that person for other people. Bring other people with you.

Mentorship is not walking up to somebody and saying, “Hey, be my mentor.” Mentors are people you have access to, have a relationship with, and can count on for advice if the chips are falling. I have a couple of mentees. It’s something that happens naturally. You might not even realize certain people are your mentors. All mentors don’t do the same thing or look the same way. It’s an organic thing that changes over time.

Who are some of your mentors and and what do you look to them for?

My mentors are people who I know I can call for advice. I ask them questions like, “How much should I charge for this?” or “How should I handle this situation?”

I call them my “life’s board of directors.” Everybody needs one. I have a lot of people on my board. I’ve flat-out said, “Just so you know, you’re on my life’s board of directors,” and they’ve been like, “Word. Aight. Cool.” I have [marketing executive and investor] Richelle Parham, the former vice president and CMO for eBay; [Ellevest CMO] Lisa Stone, and [journalist and author] Denene Millner, who has written like 25 books. It’s great to have them as sounding boards in certain situations where I’m not sure what to do. Denee was the person I called when my now-book-agent emailed me three years ago to say she wanted to represent me. She was the one I was asking things like “What are the right questions?” and “Does this sound OK?” It takes a village.

Oprah. I definitely watch to see how she moves through the world. She has owned what she has done in such a real way. Her life has been a testament to “do the things that you love.”

Read: How I Built The Life I’d Always Dreamed Of

How do you feel about representation in media and on screen?

Representation can change lives. People need to see themselves in spaces and places that matter. For a little Black girl to see another Black girl on a stage with Richard Branson, it tells her, “I could possibly be that person one day.” Representation in media lets people know what’s in the realm of possibility. Some people have a great imagination. They say, “I don’t see it, but I can do it myself anyway.” But, for most people, they need to see something to realize it’s something they can touch and do.

When I was growing up, I didn’t see anyone like me – a casual writer who was making money doing her thing. Besides Oprah. But even Oprah felt pie-in-the-sky because she wasn’t a writer. That’s part of the reason I fought calling myself “a writer” for such a long time. I didn’t see it. Now I hope I am somebody people people can look to and use to see the possibilities for themselves.