How Joining A Multicultural Sorority Helped Me Find My Voice 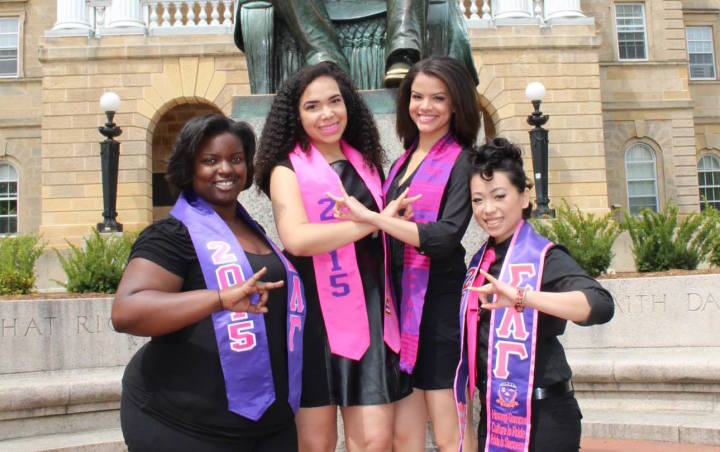 I grew up in a very traditional Latino household in Spanish Harlem. My mother did not speak up for herself much among family members, and as a little girl, I learned from her example and became fairly shy myself. But I also grew up watching chick-flicks featuring social butterflies, and I always wanted to know what it was like to join a sorority.

When I left New York City to begin my freshman year at the University of Wisconsin, I was curious to see what real-life sororities were all about. The idea of having a community and network on campus really appealed to me, especially because I was 1,000 miles away from home and suddenly in an area where I was, as a Puerto Rican woman, a minority. But I never expected that going Greek would help me connect to my culture and develop my sense of self the way it did.

I arrived on campus knowing a little about rushing and pledging, but I’d never heard of a “multicultural sorority” until I met a few sisters from Sigma Lambda Gamma (SLG), a historically Latina sorority, at an activity fair. I felt inspired as I watched how SLG’s members carried themselves. I admired their confidence and involvement in other campus organizations. Their emphasis on cultural awareness was especially touching for me, as someone who was still looking for ways to get in touch with my Latinidad.

After going through the new membership program and being initiated, I was welcomed into SLG’s network of a few dozen amazing members. It was the first time in my life I found myself surrounded by strong-willed women. If we’re talking stereotypes, the women of SLG have a reputation for being very bold and outspoken. They taught me how to find my voice and be comfortable using it. I needed to be just as forward and direct as the women around me if I wanted my opinions and ideas heard.

I can’t really pinpoint one moment when I realized SLG was my home on campus, but I came to let more of myself shine through to my sisters, sharing parts of myself I’d never been comfortable opening up about before. I didn’t need to filter my thoughts. My sisters would help me and support me with anything I was going through, and I’d do the same for them. Through our struggles and our successes and everything between, we were family.

What I appreciate the most about SLG is the way it embraces and celebrates diversity. While SLG is a Latina-rooted sorority (i.e. all of our founders are Latina), it was created to bring together a truly multicultural membership. My chapter has women from a wide range of backgrounds – in addition to my Latina sisters, I have sisters who identify as Asian, Black, and White.

Being in a multicultural sorority helped me understand that your culture can come in the form of whatever traditions you grew up with, as opposed to some dictionary definition of a particular group of people. To learn about each other’s culture, we’d host “culture nights” where everyone would bring in dishes from their cultures – kind of like a potluck, but way better. Before eating anything, each person would stand up and explain where the dish came from, why she brought it, and what significance it had to her. Our events also reflected this emphasis on embracing and learning from each others’ backgrounds. Each year, we’d host Miss Cultura, a scholarship pageant in which women would share aspects of their culture with the audience. The winner would receive a $500 prize.

My experience in Sigma Lambda Gamma helped me figure out how I identify within my own culture. For the first time, I became comfortable owning who I was: Yes, I’m Puerto Rican. No, I did not grow up speaking Spanish – and guess what? That doesn’t make me any less Puerto Rican. Yes, I’m a bookworm, I’m kind of nerdy, and I speak eloquently. I don’t have any rhythm. I can’t dance salsa. I can barely dance bachata. But that doesn’t make me any less Puerto Rican either.

It’s ironic that it took a group to help me define my Latina identity for myself. But Sigma Lambda Gamma isn’t any ordinary group. Even after graduation, the bonds of sisterhood continue to be an important part of my life. In college, the sisterhood helped me find my voice. Now I know that there are sisters all around the world who will help make my voice heard, and I hope to do the same for them.