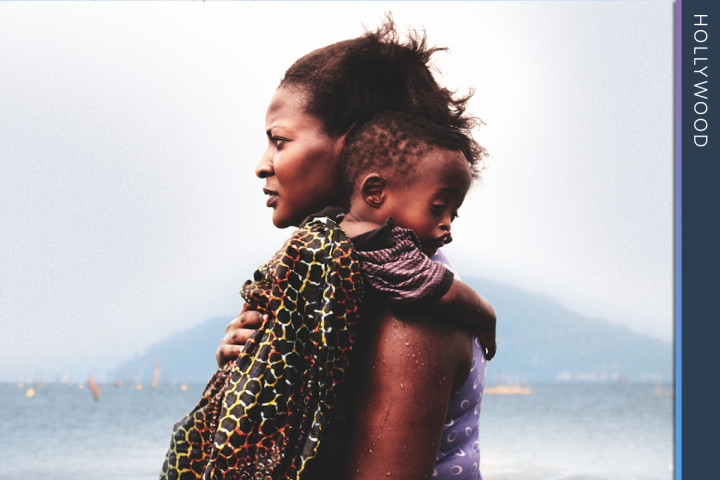 A scene from Anany's 2016 film, Children of the Mountain.

Tell us about your journey into filmmaking and directing.

I lived in Ghana until I was 19, and all that time, I dreamed of being a star in Hollywood. I was inspired by Michael Jackson. His videos were like mini movies, and they got me dreaming about figuring out ways to make my writing come to life. I didn’t really have a plan or even understand precisely what I wanted to do, but this teenage dream was the reason I eventually decided to move to the United States. Of course, once I arrived, I quickly got a reality check, not to mention a bit of culture shock. I went to Maryland for the first year to get myself acclimated. But after about a year, I moved to New York City, where my sister was working as a nurse. I had never seen so many diverse people in one place, and things here move so fast. But I like to think that I adapted to and embraced American culture pretty quickly.

Things weren’t always easy for the first couple of years, though. I didn’t have any money when I arrived in New York, so before I could do anything else I had to get a job. Through my sister, I learned that you could work as a nurse aide, so I did that for a couple of years before enrolling in film school. After I graduated with my bachelor’s, I went back for my master’s in communications. The second I graduated, I returned to Ghana to make my first film.

What is your recent film, Children of the Mountain, about?

Children of the Mountain is a fictional story that takes a closer look at some of the challenges that women and people living with disabilities in Ghana face. The story follows a mother, Essuman, who is forced to either fight for her child or succumb to societal pressures to abandon him after he is born with a cleft lip. Both her mother-in-law and the child’s father want nothing to do with the baby and go so far as to accuse her of causing the child’s predicament. At first, she too wants to abandon her child. But she quickly realizes that she’s the only person who can love, protect, and support the child. So she raises the child alone hoping that, one day, she’ll raise enough money to pay for reconstructive surgery. However, she doesn’t anticipate the other health complications — down syndrome and cerebral palsy — that the child is later diagnosed with. She becomes determined to find a cure, traveling to visit doctors, healers, and seeking out any and all resources that are available to her in West Africa. What made you want to go back to Ghana to tell this story?

Although I grew up in Ghana, I was privileged enough to be unaware of some of the stigmas and challenges that women face there — things like maternal health, child care, and inadequate healthcare for people with disabilities. Childbirth really is life or death. And if a child is sick or is born with some sort of abnormality, like a cleft palate, superstitions, and old wives’ tales can cause the mother and child to be cast as pariahs by the rest of their village. Even if people in Ghana had access to the healthcare we do in the west, most families couldn’t afford it. Do you have a personal connection to the story?

I do. Children of the Mountain was inspired by my family’s story. Growing up, my mother told me stories about how her parents struggled to find a way to help her sister, who died very young, especially since no one could really ever give them an official diagnosis. My grandmother would take my aunt from one doctor, healer, pastor, and shaman to another, hoping someone could cure her. I wanted to tell a story that reflected that singular mindset — a mother who was willing to do anything for her child's health. I combined that with prose a friend of mine wrote explaining why she believed it was her fault that her daughter was born with down syndrome. People in the very remote areas of Ghana tend to think many conditions and disabilities are caused by curses or evil spirits, and that makes it a very difficult to have progress. The first step is education, and that’s part of what I’m trying to do with this film.

You worked with Ghana-based agencies and NGOs to cast actors who actually had cleft lips. Why was this important to you?

For one, this film was a low-budget indie, and I couldn’t afford special effects. But that was also a conscious decision to inspire authenticity. I wanted the film to be as realistic as possible in order to draw the audience into the story and allow them to understand and sympathize with the characters.

You’ve said it is important for Africans to tell this African story and to give the characters agency. Do you see this as a shortcoming of the film industry?

Yes. There have been several stories set in Africa or about Africans that have been told by non-Africans. Why? There are plenty of capable and amazing African filmmaker who could have told those stories more authentically. I’m not saying we shouldn’t be able to tell whatever stories we want about whomever we want wherever we want. We should. But when there’s an opportunity to tell certain stories – certain African stories – African filmmakers should be the first to be considered for those projects.

The entertainment industry seems to be having a lot of conversations around authenticity in film, especially within the last few years. What are your thoughts on the current level of representation on screen? We’re in some ways having a record-breaking year when it comes to diversity in the films that are being celebrated this awards season, yet we’re also still encountering controversies around topics like racially-blind casting.

When I was in film school, I was very much the minority. In my class of 50 or 60 students, I was one of only two African-American females. Because of that, I have always felt the need to highlight more people of color in my work. My goal will always be to have a diverse cast and crew. The film industry has to do a better job of recognizing the work that people of color are doing. It’s past time that minorities are not only accepted, but more included.

Children of the Mountain is available for streaming on iTunes, Amazon, and Google Play.